Building a responsive table in React Native with Hooks

This post details a technique that you can use in a dual orientation app to render more (or less) data in your tables–as space permits—using a couple of simple hooks. Keeping in mind that the last thing our app users want is to be unable to access the data they’re looking for, we’ll provide a hint showing how they can rotate their device to reveal even more.

Let’s begin with an example of how your app can look when you try to cram everything onto a small screen. This is the situation we’ll aim to avoid: 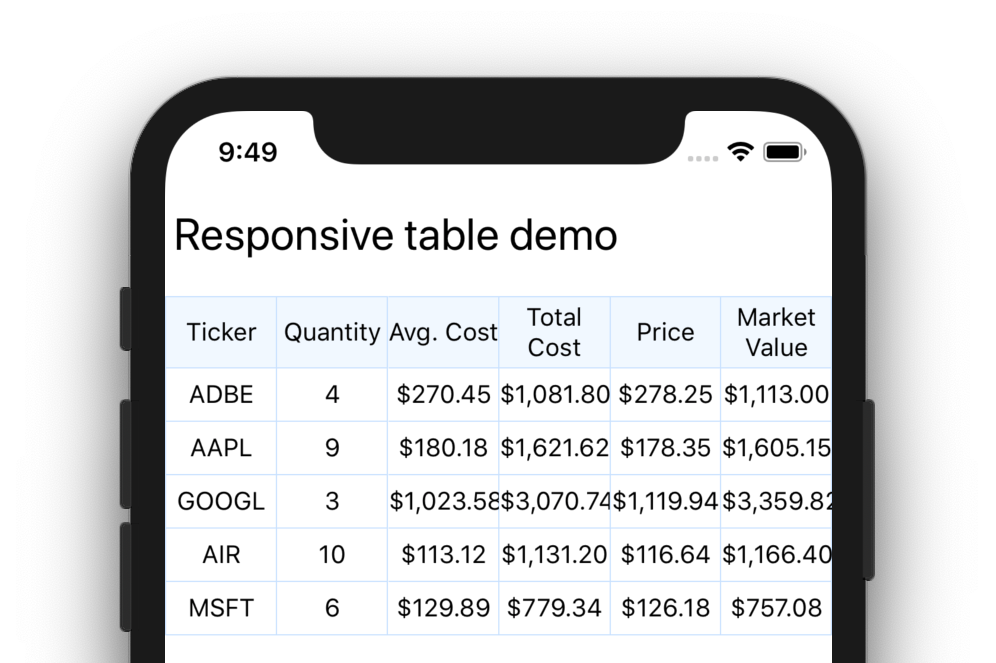 The first thing you’ll need is some tabular data in your app. For my sample app (code can be found here: blefebvre/react-native-responsive-table ), I have used the react-native-table-component package for rendering my table. This package provides a simple API and some handy extension points for styling various aspects of the table. The sample app includes six columns of data, representing securities in a stock portfolio:

We will also need a function that can figure out which items should be included given a device breakpoint, and return the reduced set of data. Here’s an example of how this function could be implemented:

A keen eye will have noticed the Breakpoint TypeScript type above. This parameter type is an enum, and is defined in useBreakpoint.ts as follows:

We will need a way to determine the breakpoint for use by the reduceDataForScreenSize(..) function. I wrote a small hook called useBreakpoint to return the current matching breakpoint:

useBreakpoint relies on another hook called useScreenDimensions to figure out the device’s screen size each time it changes:

The two hooks compose together nicely, so all that needs to be done from our responsive table component is call const breakpoint = useBreakpoint(); and pass the result along to the reduceDataForScreenSize(..) function.

Here’s how this looks all put together (in StockTableResponsive.tsx):

Lastly, it is a good idea to tell the user that more detail can be revealed by rotating the screen. I have included a simple component above called <RotationHint /> which is going to do exactly this: 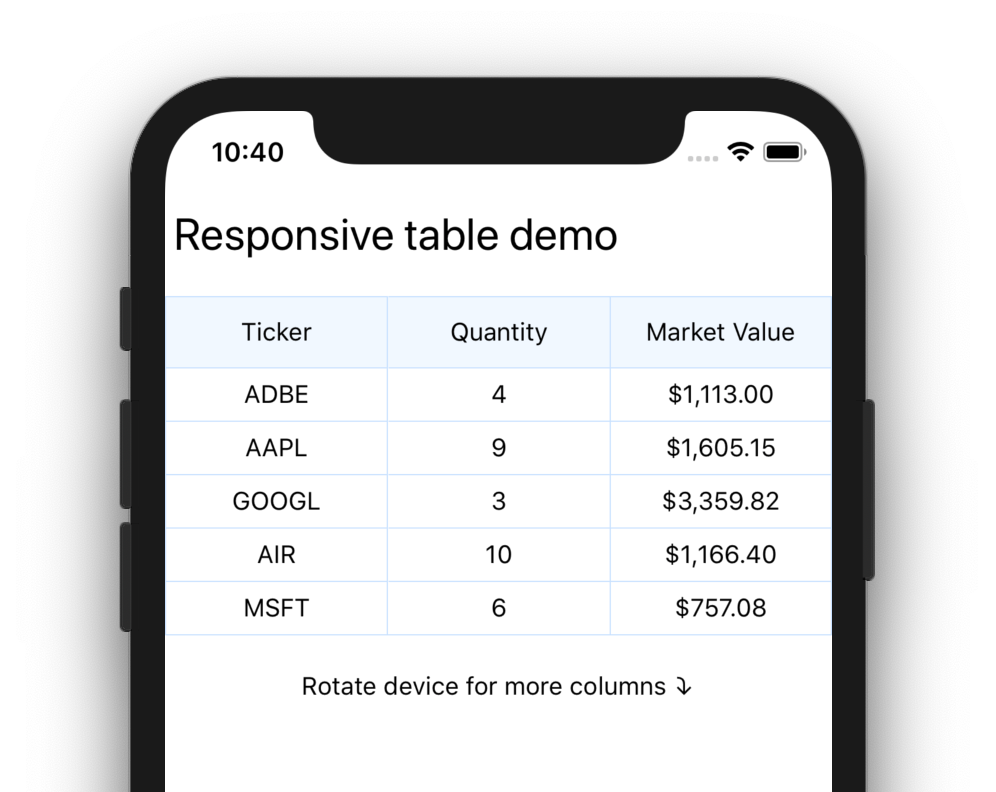 Once the device is rotated, the additional columns are instantly visible to the user: 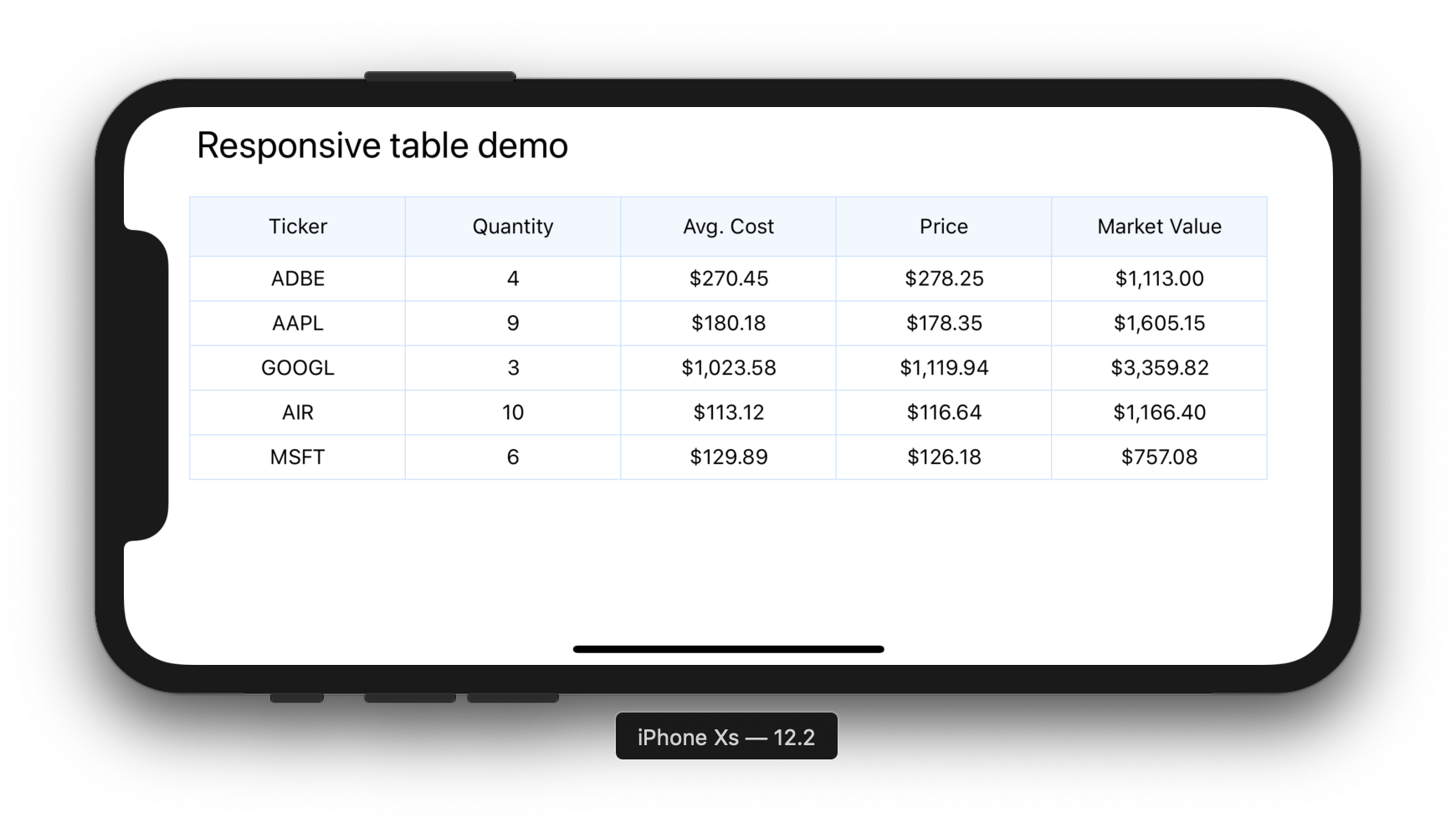 That’s it! You now have a table that looks great on mobile and supports showing additional data by rotating the device.

The demo app can be found on GitHub: github.com/blefebvre/react-native-responsive-table